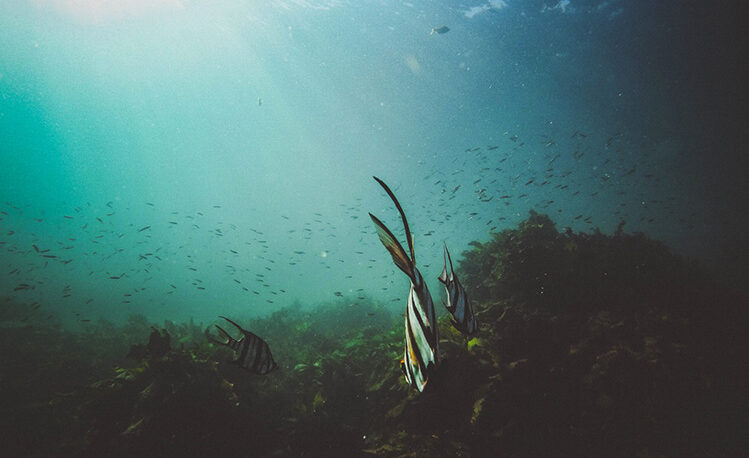 A large proportion of all life on Earth lives in the ocean. Exactly how large the proportion is unknown, since many ocean species are still to be discovered. The ocean is a complex three-dimensional world covering approximately 71% of the Earth’s surface. The habitats studied in marine biology include everything from the tiny layers of surface water in which organisms and abiotic items may be trapped in surface tension between the ocean and atmosphere, to the depths of the oceanic trenches, sometimes 10,000 meters or more beneath the surface of the ocean.

Specific habitats include coral reefs, kelp forests, seagrass meadows, the surrounds of seamounts and thermal vents, tidepools, muddy, sandy and rocky bottoms, and the open ocean (pelagic) zone, where solid objects are rare and the surface of the water is the only visible boundary. The organisms studied range from microscopic phytoplankton and zooplankton to huge cetaceans (whales) 30 meters (98 feet) in length.

„The water was tripping over itself, splashing and hypnotizing, and I tried to fix my mind on a chunk of it, like each little ripple was a life that began far away in a high mountain source and had traveled miles pushing forward until it arrived at this spot before my eyes, and now without hesitation that water-life was hurling itself over the cliff. I wanted my body in all that swiftness; I wanted to feel the slip and pull of the currents and be dashed and pummeled on the rocks below . . .“
— Justin Torres (We the Animals)

Marine life is a vast resource, providing food, medicine, and raw materials, in addition to helping to support recreation and tourism all over the world. At a fundamental level, marine life helps determine the very nature of our planet. Marine organisms contribute significantly to the oxygen cycle, and are involved in the regulation of the Earth’s climate. Shorelines are in part shaped and protected by marine life, and some marine organisms even help create new land.

Many species are economically important to humans, including both finfish and shellfish. It is also becoming understood that the well-being of marine organisms and other organisms are linked in fundamental ways. The human body of knowledge regarding the relationship between life in the sea and important cycles is rapidly growing, with new discoveries being made nearly every day. These cycles include those of matter (such as the carbon cycle) and of air (such as Earth’s respiration, and movement of energy through ecosystems including the ocean). Large areas beneath the ocean surface still remain effectively unexplored.
Early instances of the study of marine biology trace back to Aristotle (384–322 BC) who made several contributions which laid the foundation for many future discoveries and were the first big step in the early exploration period of the ocean and marine life. In 1768, Samuel Gottlieb Gmelin  published the Historia Fucorum, the first work dedicated to marine algae and the first book on marine biology to use the then new binomial nomenclature of Linnaeus. It included elaborate illustrations of seaweed and marine algae on folded leaves.The British naturalist Edward Forbes (1815–1854) is generally regarded as the founder of the science of marine biology.[9] The pace of oceanographic and marine biology studies quickly accelerated during the course of the 19th century.